Types of tree damage and their treatment

Tears and damage to the bark. Tearing of the bark occurs most often on the trunks and is usually caused by vehicles. Such injuries are exposed to trees growing near the road without a curb as well as trees located in the areas of various constructed facilities.. Failure to comply with the applicable regulation ordering the protection of trees on all construction sites, causes frequent damage to these plants by various vehicles and machines. The bark is torn when the trunk hits. Then, the cortex within the cambium layer separates and tears out. The area of ​​the internal detachment may be much larger than the apparent area of ​​the cortex detachment. Such separations are most easily created in the spring and early summer period, when the intensity of cambium cell division is greatest. Rip sizes, the size and shape of the wound may vary. Very strong blows can tear or crush the wood. Tears of the bark on very large areas also often appear below the fractures of side branches and limbs. In the upper part of such damage, the wood layer is also torn off.

Treatment and care of this type of damage consists in cutting the edge of the bark with a sharp knife and giving the wound surface an elongated elliptical shape.. 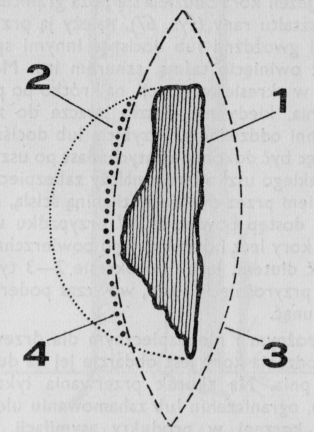 Drawing. Damage to the bark with tearing out and separation: 1 - tear area, 2 - separation area (pickup), 3 - the required shape of the wound after forming the edges, 4 - place of nailing.

If the cortex separates beyond the required wound shape), it should be nailed with stainless nails or pressed by other means, e.g.. by wrapping with tape, rope, etc.. This is only possible during the growing season, shortly after the failure occurs, when the separation surface has not yet dried. Nailing or pressing down should therefore be made immediately after damage. The place of such damage should be protected against drying by wrapping it with a tight fabric, but allowing air access. In case of damage not only to the bark, but also to the wood, its surface must be leveled with a chisel. If, after a period of 2-3 weeks, there has been no attachment of the bark, then the torn flap should be removed.

A very dangerous and dangerous type of bark damage is tearing it along a large part of the trunk circumference. As a result of interruption of the sip (sieve bundles), supplying the roots with assimilation products is limited or inhibited. This can lead to a serious limitation of the physiological functions of the roots and, consequently, to an insufficient supply of water and mineral salts in the tree crown.. Such damage is all the more dangerous, the greater part of the trunk circumference was stripped of its bark. The risk is increased by the high air temperature prevailing at that time, strong sunlight and winds. Tearing the bark around the entire circumference leads to the death of the tree.

If the bark is destroyed over a large part of the trunk circumference, it is possible to perform bridge vaccinations. The task of the implanted shoots is to replace the interrupted bast, taking over its activities and mechanical strengthening of the damaged part of the trunk (drawing). 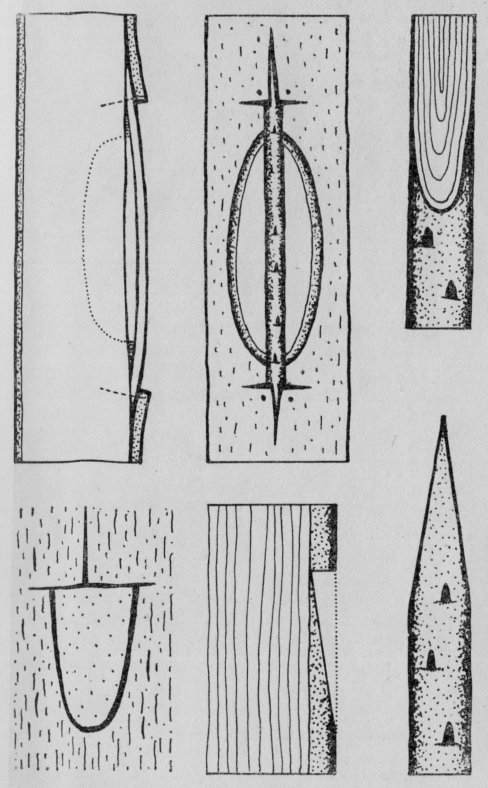 Drawing. Bridge grafting over the place where the bark is torn on the trunk and the method of cutting the bark and preparing the ends of the implanted shoot.

If the bark is torn from the ground up to the beginning of the roots, then performing bridge grafting is difficult, because it would require implanting the lower end of the shoot into the root. In such cases, implantation over the site of damage to the end of one or more shoots of 2-3-year-old young trees of the same species is used., planted next to it.

Drawing. Protection of a tree damaged as a result of tearing the bark on the ground floor: a shoot of the same species planted next to a young tree was implanted above the damaged area.

The number of implanted shoots is usually 3-5. A larger number of shoots should rather not be grafted, because when they thicken, they can exert pressure on each other. Shoots used in both types of bridge vaccinations, after fusion with the tree, they thicken very quickly, creating a good protection against the effects of past damage. Damage to the bark can also occur in summer from sores, caused by the sudden exposure of the trunk, that is, exposure to sunlight; this is called sunburn. The heating of the bark can be so strong, that it will lead to the death of the cambial cells and the entire phloem lobe located in the place of overheating. This is observed quite often on the trunks of spruce and beech trees in the mountains when the adjacent shade trees are removed.

It is easier for trees with smooth and thin bark and younger trees to suffer from gangrene damage. Similar to the previously described damage to the cortex may occur in the pre-spring period as a result of too early stimulation of vegetation and the action of cambial cells, from the sunny side or around the perimeter. The direct cause of partial or complete damage to the cortex is then rapid temperature drops, which destroy the stimulated tissues; this is the so-called frost gangrene. In many cases, this type of partial damage is difficult to detect in the first year. The bark in such places should be removed, and the wood surface is properly protected. Failure to do so leads to infection by various fungi and to the rapid decomposition of the wood.

In all cases of damage to the bark and exposure of the wood, use appropriate disinfectants as soon as possible and cover the wood in such places with coatings that prevent moisture..