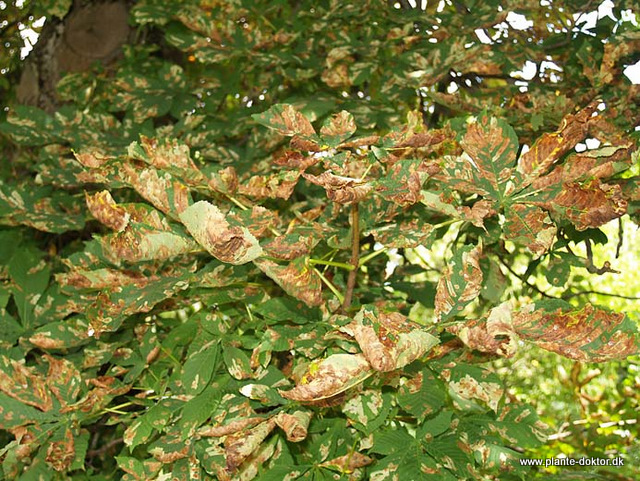 On the leaves and shoots of many deciduous trees, including fruit, there are necroses caused by fungi of the genus Venturia.

Horse chestnut anthracnose, willow and ligusters are caused by the fungus Glomerella cingulata (State) Spauld et Schrenk (stadium conidial Colletotrichum gloesporiales Peuz.), which affects the upper parts of the shoots and often leaves. On red oak, anthracnose with serious consequences can be caused by Gnomonici sp. The occurrence of these fungi causes the leaves to fall earlier, there are also disorders in the course of photosynthesis. It is recommended to rake and burn fallen leaves from conquered trees.

Leaf diseases. There are numerous species of fungi belonging to the ascomycetes on the leaves or needles. A common disease is oak mildew caused by the fungus Microsphaera alphitoides Griff. and Maublanc. It poses a serious threat to native oaks, especially if he masters the assimilation apparatus, freshly regenerated, e.g.. after the feeding of the cockchafer or green leaf rollers. Where these two factors "overlap", the injury could be serious, and young trees even die. This phenomenon is known as "oak chain disease". The fungus in the conidial stage appears as a white cloudy coating on the leaves, in the sack stage - as dark brown, spherical surroundings.

There are also black tar spots on the leaves of the trees, which are symptoms of diseases called black spots. They are caused by sack fungi of the genus Rhytisma. One of the most common diseases of this kind is: maple melanoma (pathogen Rhytisma acerinum Pers.), striking maple leaves, jaworu i paklonu, sycamore melanoma (patogen R. pseudoplatani K. M.), causing smaller but more numerous spots on the sycamore leaves, and willow melanoma (patogen R. salicinum Pers.), impressive big, black spots on willow leaves. However, melanomas do not cause any particular damage to parks and other urban green areas, they have a fairly large negative significance, because they reduce the decorative value of trees.