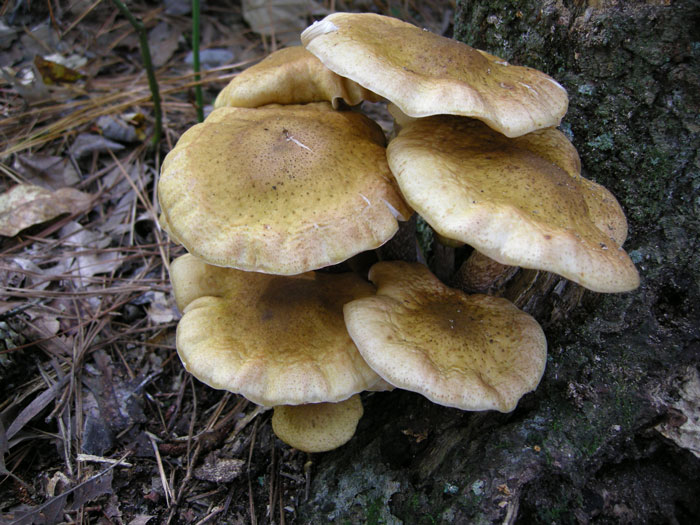 One of the common and dangerous parasites of almost all conifers, deciduous trees and shrubs is the honey mushroom (Armillaria mellea Owal.). It is a very dangerous parasite in forest stands, especially solid spruce and pine trees. This fungus is common on older trees in the city, especially in parks, invoking, together with the other factors discussed, withering trees.

The mycelium formed from the spores germinating in the humus soil penetrates under the bark of the roots and develops most often into spore forms visible after detaching the bark, i.e.. black cords - rhizomorphs - or white patches. The appearance of mushrooms with a slender stem and rough yellow-brown color (the color of honey) a hat is a sign of the advanced development of the disease. The disease process lasts for several years and the tree usually withers. This fungus causes the so-called. white rot of the wood of the roots and butt. The wood spread by the armillaria glows in the dark (luminescencja). Chemical control of stumps is not yet fully developed. Removal of fruiting bodies leads to a significant reduction of the risk; it's worth pointing out, that they are edible and valued. Infested trees should be removed and burned, roots and stumps. If grubbing up is not possible, stumps with roots should be debarked as thoroughly as possible and the roots should be exposed as deep as possible, and any remaining pieces of the roots, burn the trunk and bark.

There is the so-called. larch cancer, damaging an arrow or a branch. This disease is caused by the fungus Dasyscypha (=Lachnellula) welcome hard. from the Ascomycetes class. Depressions form on the affected bark, then it breaks, dies and falls off. Despite the scarring of the wound by the healing tissue, crayfish increases every year as a result of freezing of adjacent parts of the bark, the frost resistance of which decreases as a result of the interaction of undefined substances released by the fungus.

Branch diseases. The second important group of diseases is caused by fungi that develop in the wood or the mouthful of branches. This damages the branches.

Shoots, branches, and even the thin trunks of poplar trees are damaged by the gangrene of the poplar bark, caused by the fungus Valsa sorida NKe. (stadium conidial - Cytospora chrysosperma (Perz.) Fries), and by poplar cancer - Cryptodisporthe populea (Sacc.) Booty (conidialne stadium Dothichiza populea Sacc. et Br.). The bark on the trunk of younger trees and branches, mostly apical, older trees, after being taken over by gangrene, dies, turns brown. Small nodules develop on them, ended with a gray shield. Yellow-orange spores emerge from them in the spring. Poplar cancer causes secondary death of the growing healing tissue in the vicinity of the dead lobes of the cortex. The weakening of trees contributes to the mass occurrence of gangrene and poplar cancer, e.g.. after late spring frosts and during periods of drought. In recent years, the symptoms of these diseases have spread throughout Poland. The gate of infection is mainly bark wounds and leaf traces. The spores spread through the wind, rain and insects. Controlled parts of crowns should be removed and destroyed together with horses and surroundings. It is also beneficial for the water management of a weakened tree.

Of other pathogenic fungi found on the branches of many deciduous trees, including fruit, the carcinogenic nodule should be replaced (Nectria galligena Bres.) and vermilion tubercle (Nectria cinnabarina Fr.). They cause cancerous trunks and branches.

A very common disease that is dangerous for elms, the so-called. vascular or Dutch elm disease, also known as graphiosis, causes Ceratocystis ulmi (Buism.) Morsyn - formerly Ophiostoma ulmi Schw. (stadium konidialne Graphium Schwartz). Under natural conditions, the fungus occurs only in the conidial stage. The mycelium develops and bears fruit under the bark of trees in sidewalks gouged out by gnats (Scolytus scolytus i S. multistriatus).The flying bolts transfer the conidial spores to the young, healthy twigs, where supplementary feeding takes place in spring and summer. In the twigs, the spores germinate, and the mycelium that grows into the vessels produces toxins and other spores, spread with water over the tree. The toxins secreted by the fungus cause the formation of so-called substances. rubber and the so-called. bottles in the dishes. Black, sealed vessels are visible on cross sections of infected shoots, branch, trunks, and sometimes even the roots. This makes it difficult or even impossible for elms to conduct water with mineral salts. Rapid dieback of leaves and entire parts of the crown is a characteristic symptom of the disease. Fighting this fungus is difficult and is usually limited to removing and destroying the mastered branches or entire trees. In addition, it is recommended to control the cervids spreading spores of this disease.