Growing currants in a row of currants enables a significant increase in the fruit yield per hectare of plantation compared to traditional cultivation. The bushes must be planted densely when growing in a row. On large plantations, where work with tractors is foreseen, the distance between the rows should be 3 m, a row from 0,5 do 1,5 m. Dense planting of what 0,5 m allows you to quickly obtain a large yield per hectare. In small plantations, maintained by hand, the distance is sufficient 1,5 m between the rows.

Lateral cultivation requires scaffolding to tie the shoots. Reinforced concrete posts must be placed in the rows, iron or wooden in the distance 10-12 m one from the other. The bars should be at least 2,2 m in length. It is unfastened on the posts 3 galvanized wires, with a cross-section of 2-3 mm placed in height 60, 110 i 160 cm from the ground (Lynx.). 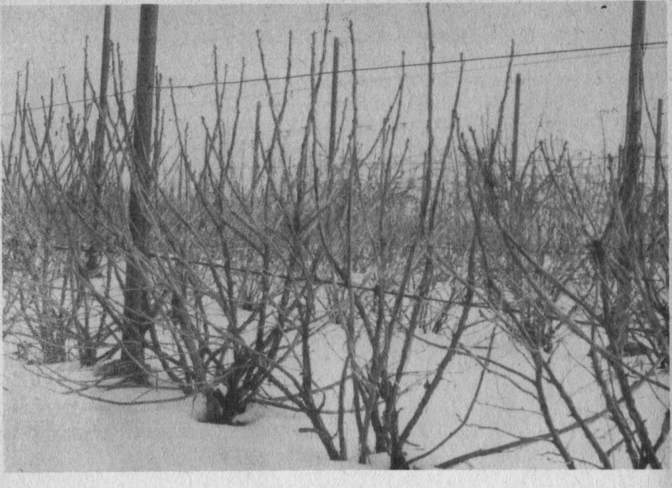 Lynx. Lined cultivation of red currant next to wires.

The bushes should be arranged in this way during planting, so that the longest shoots are on the row line. We leave these shoots. Shoots directed to the inter-row should be cut. The number of shoots left in a row depends on the planting density. If we plant bushes every half a meter in a row, leave only after 2 shoots on each bush. At planting distance 1 m, you have to leave after 4 shoots on each bush (Lynx.).

Lynx. A bush of red currant stretched over the scaffolding.

The distances between the shoots in a row should be 25 cm.

If bushes are planted in a row what 1,0 or 1,5 m, then in the first year we will not find enough shoots to fill the entire row. Extra shoots must be selected and left in the second year. Tie the remaining shoots with a string to the wire. Tie the shoots loosely with one string. To do this, tie the end of the string at the beginning of the row, and then, holding the ball in the right hand, we twist the string in a spiral around the wire and subsequent shoots, which we hold on the wire with our left hand. By slightly bending the shoots, we regulate the spacing between them, to find what 25 cm. It is not allowed to tighten the string around the shoots, because the string cuts into the thickening shoots causing them to break off. Having tied a sufficient number of them in the row, remove the unnecessary shoots. In the following years, we cut out all new shoots, which appear at the root neck. The side gains also need to be shortened, which appear on skeletal shoots. The easiest way to shorten these gains is in summer, just before harvesting the fruit, cutting with hedge trimmer. We cut the currant field with scissors in the same way as the vertical walls of a hedge.