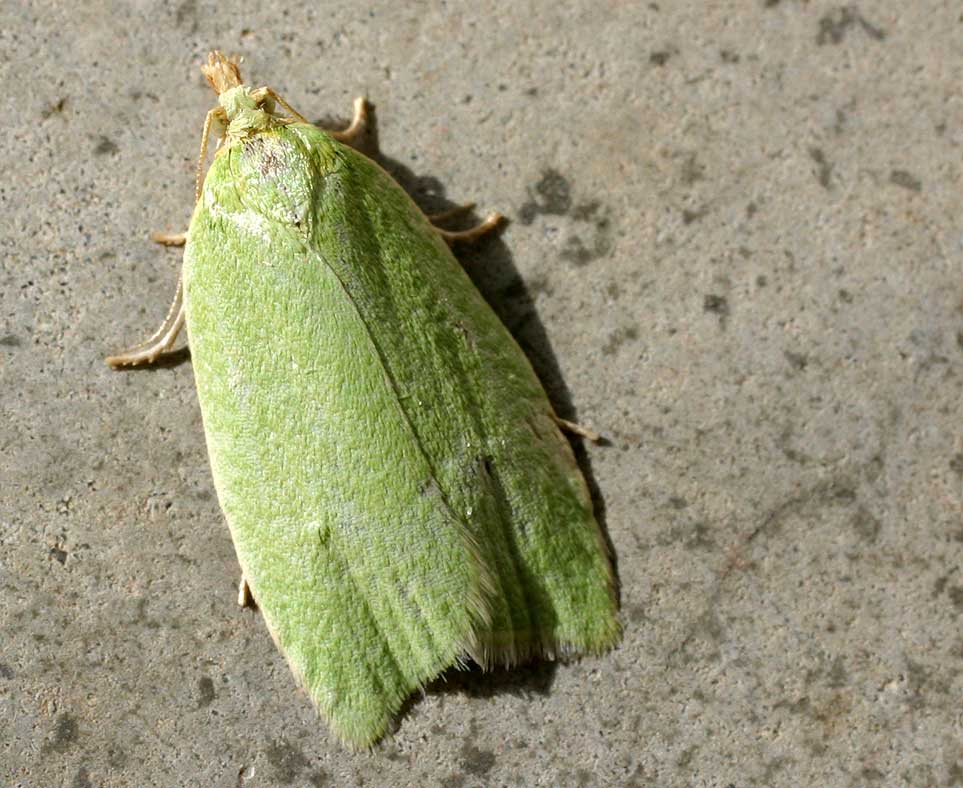 The harmful insects of trees are divided, in order to simplify the issue artificially, on the so-called. primary pests, physiological and secondary.

Primary pests. The so-called pests. primitives can damage trees even healthy in our understanding, most often by overeating, skeletonization or leaf mining. Such damage, according to its size, they weaken trees and inhibit its growth. The so-called "complete prey", weakened trees may no longer survive repeated damage or the consequences of unfavorable weather conditions.

Among the insects that feed in this way on the leaves or needles of trees in cities, a few common butterflies may be of significant importance., beetles and planters, which will be briefly discussed below.

Insects gnawing leaves. Green leaf rollers often feed on oak leaves (Tortrix viridiana L.). It is small, light green butterfly, tending to occur massively. After the larvae are feeding, the leaves are rolled into tubes, in which pupation takes place. The forage of green grass is particularly dangerous, if powdery mildew occurs at the same time.

Common pests of many species of deciduous ornamental and fruit trees are the larvae of the willow's protein (Stilpontia toasted L.) and a rudnica rugby (Euproctis chrysorrhoea L.).

On almost all deciduous trees, mainly on oaks, rake and beech, it preys the acorn (Cheimatobia brunata L.). The larvae of this pest are green with three white lateral lines and a dark dorsal line.

Similarly, many deciduous species are preyed by the corner larvae (Phatera bucephala L.).

The leaves of the poplar are often gnawed in a bay by the larvae and insects of the perfect poplar (Melasoma populi L.). Eating causes losses in growth. Cockchafers are a common pest of trees in the city, mainly the May beetle (Melolontha melolontha L.). His larvae (grubs) they damage the roots, and insects feed perfectly on the leaves of many types of trees. Medical Majka (Listen versicolor L.) damages the leaves of the yen. There are also many other insects gnawing at the leaves or needles of trees, however, their importance is much less.

Leaf skeleton insects. Many skeletal leaves can be found in the treetops. Skeletonization is a way of feeding insects on leaves, consisting in eating the crumb and skin together with the epithelium, without disturbing the conductive beam system. Among the insects that cause damage of this type is hurmak olchowiec (Agelastica alni L.). It is dark purple, a shining beetle, whose black larvae skeletonize the leaves in July and August, and even damage the bark of young alder shoots. Black alder is often weakened in cities due to overdrying of stands, therefore the harmfulness of hurmacs may be serious in such cases.

City lime leaves tend to be skeletonized by the mucilage (Caliroa anulipes K.). A locker in dry and warm years can spend at least two generations. The larvae can gnaw the leaf crumb of all linden, except silver linden and Warsaw linden. Even complete forages can often be observed.

Leaf mining insects. Many species of insects cause damage called a mine, consisting in eating away the leaf crumb leaving the upper and lower skin. Mines are caused, among other things, by the tryszerki larvae (Trischeria complanella Hbn.), oak-leaved (Orchestes quercus L.) and the larch vagina (Coleophora laricella Hbn.).

Physiological pests. The group of pests called. physiological insects are included, which have the ability to occur in large populations for many years. Controlled trees survive, however, they are increasingly weakened.

From the group of the so-called. of physiological pests, suckling insects deserve attention, mostly June (Coccoidea) and aphids (Aphidoidea).

On many trees, June is common in numerous populations. The following are the most common species.

3) Mytilaspis conchiformis, found on many deciduous, mainly on linden trees;

4) Quadraspidiotus gigas, which can severely damage poplars and willows.

The four species mentioned here belong to the Scale family (Diaspidiaae), for their body is covered with scaly discs.

5) Plum bowl (Lecanium horns Mouth) belongs to the cupcake family (Lecanidae); this June's body is covered with a bowl.

If the scots occur en masse, they cause shoot dieback or extensive nephrosis of the trunk bast. The whole tree often dies. However, these processes continue for a longer period. Due to the small size and inconspicuous shapes and colors, these pests are often overlooked. Young trees planted in the vicinity of trees infested with bugs are usually quickly colonized by their larvae, which makes it difficult for the plants to take up.