Rational cultivation of raspberries requires scaffolding, which support the limp shoots in an upright position. The vertical arrangement of the shoots facilitates the care of the soil, spraying plantations and harvesting fruit. Plants are well insolated and therefore healthier (Lynx.). 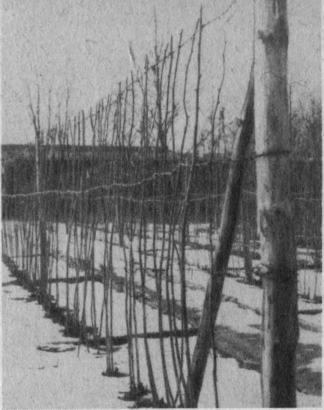 Lynx. Raspberries in a row crop

Scaffolding, similar to fruit trees, they consist of reinforced concrete or wooden posts and wires attached to them. The posts should be long 2,0 m, and a diameter of 8-10 cm. Wooden posts should be impregnated by soaking the lower parts in Xylamit before digging in. The posts are dug to the depth 0,8 m every 10-12 m from one another.

There are several ways to unbutton raspberry shoots (Lynx. 192).

The easiest way is to stretch one wire with a diameter of 2-3 mm, at a height of 1.0-1.5 m from the ground. If the shoots are flexible and slack, they can be bent and wrapped around the wire. They then stick by themselves. If the shoots are stiff, then it is better to tie them to the wire with string. We tie the shoots with one string, as already described in the chapter on the lane cultivation of currants (Lynx.).

Lynx. Raspberry shoots tied to the wire by twisting the string.

The distance between the shoots along the wire should be 6–8 cm. If there are a lot of shoots, we cut the weakest of them at the ground.

We tie the shoots in the middle of summer, after fruit harvest. At this time, we also cut last year's shoots close to the ground, which die after fruiting.

A higher line can be formed by unfastening the wires in two levels. Tall shoots are then attached to two wires, and low only to the bottom wire. Two wires can form a wall that is flatter than one, but they require more work tying the shoots.

When growing raspberries in a lane form, only these shoots are attached to the wires, which sprout in rows. Offshoots appearing in the inter-rows should be destroyed during the summer, starting from May, when they are approx 20 cm in height with mechanical cultivation or herbicides.