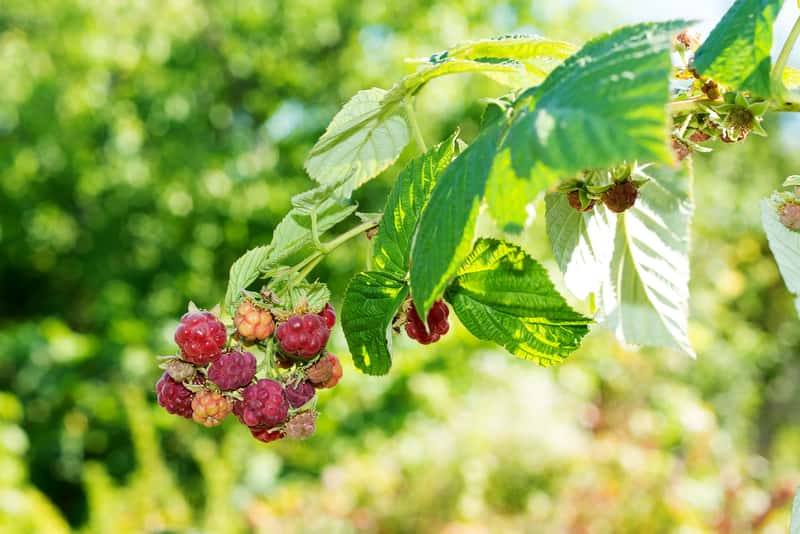 The most dangerous disease of raspberries is the dieback of raspberry shoots - fungal disease, which strikes the young, one-year-old shoots. Brown spots appear on them, which are constantly growing, causing the drying bark to peel off, followed by shoot dieback.

This disease can be combated by meticulous excision, right after harvesting the fruit, all fruiting shoots (2-summer). The plants are further sprayed with Euparen at a concentration 0,25% first time, when young shoots reach 10-20 cm and then what 10-14 days.

The white blotch of raspberry leaves is round, initially brown, later whitening – spots on the leaves, often on petioles and shoots. This disease is controlled in the same way as the shoot dieback described above.

Gray mold is a disease that affects shoots, flowers and fruits. Affected shoots turn gray, and then brown. Often black discs appear on their bark – parasitic fungus sclerotia. Infected flowers turn brown and dry. Gray develops on the surface of the fruit, dusty coating. The source of spring infection is mycelium, which develops on dead plant parts and sclerotia, in summer – zarodniki conidialne. The disease develops especially strongly in wet years. It is fought in the same way as shoot dieback.

The most dangerous pests of raspberries are: raspberry-raspberry-flower and raspberry-flower kistnik. The first one damages the developing flower buds, as a result of which plants sometimes do not bear fruit at all.

The larva of the raspberry kistnik feeds in the ripening fruit, and also in flower buds. Adult insects damage young leaves. They are fought against, by spraying for the first time on 10-14 days before flowering with one of the following preparations: Metox col. 30, Insectophos. 50, Metation E-50, Sadophos col. 30, and the second time just before flowering. Two sprays are then performed, when pests were abundant in the previous year.