Approximately natural apple trees have crowns of 10-15 branches. Before the trees are old 10 years, the number of branches should be reduced to 7-8 by gradually thinning them first in the lower part of the crown, and later in the top. When X-raying the crowns, cut out whole limbs or thick branches, avoiding cutting small shoots. In no case should annual shoots be shortened.

The described method of cutting trees in a dense intensive orchard ensures regular fruiting, creates conditions for effective spraying of trees and allows apples to grow to the required size. Winter cutting, however, does not provide the appropriate blush on apples. After winter pruning, it breaks out a lot of new shoots on its limbs, which grow intensively over the summer shade the crown. To obtain nice apples, the winter cut must be supplemented with the summer cut. Summer cutting should be done at least on 4 weeks before harvesting the fruit, so that during this period the apples may turn red. When growing the Close variety, whose apples are picked approx 25 July, summer cutting must be performed at the end of June. We perform summer pruning on trees of winter varieties in August. At this time, use a pruner to cut out all intensively growing shoots from the upper and middle parts of the crown, which are colloquially called wolves. Leave the shoots around the perimeter of the crown.

If the orchard is planted in fertile soil with a spacing of 6X4 m, even when the right cut is used, it is difficult to keep it at this spacing longer than by 15 years. The Bankroft varieties cause the most trouble, Starking and Beauty with Boskoop.

In practice, there are two methods of thinning an orchard that is too dense. The first is this, that every other tree in a row is removed, without changing the direction of cultivation in the orchard (Lynx.). 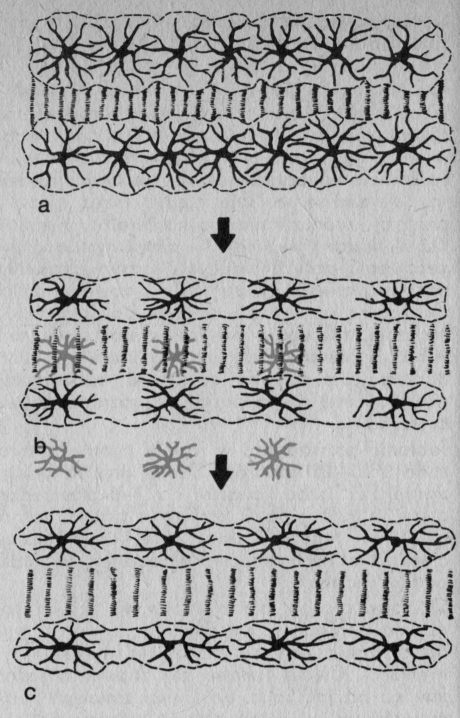 Lynx. Thinning the orchard without changing the direction of cultivation: a - thickened rows of trees; b – trees intended for grubbing-up trimmed on all sides, other crowns flattened; c - orchard after grubbing up every second tree in a row.

This method has many advantages. It does not require the destruction of the turf strips in the inter-rows and their installation in the opposite direction. Trees do not have to be grubbed up. They can be cut with a ball just above the ground, because the stumps left in the rows will not interfere with the cultivation of the soil. Suckers growing out of the stumps can be easily destroyed with herbicides. Finally, it only makes it possible to thin out some of the rows made up of a strong-growing variety, and leaving adjacent rows composed of a weakly growing variety.

If we plan to thin the orchard in the above-mentioned way, it is already a few years earlier that the crowns should be cut more strongly from the inter-row side to change the shape of the crowns from circular to oval or lane. At the same time, every second tree in the row to be grubbed should be marked with paint. These trees should be cut strongly from all sides for a period of 2-3 years, that permanent trees can grow and fill the free space in the rows during this time. After removing half of the trees, the row spacing will be 6 m, and in rows 8 m. At this spacing, trees can stay at least for 25 years.

The second way to thin an overly dense orchard is to remove every second tree in a row and change the direction of the crop by 90 °. (Lynx.).

Lynx. Thinning the orchard with a change in the direction of cultivation: a - excessively compacted rows of trees, b - trees intended for grubbing up, heavily trimmed; c - orchard after dilution.

This method is justified in the quarters, where all trees need to be grubbed up, especially when, after grubbing up, the cultivation is done parallel to the long side of the field. Longer inter-rows then increase the work efficiency. With this method, trees should be removed along with the roots, because the stumps left behind would end up in the middle of the working streets, making it difficult to mow the turf.

When planning thinning of the orchard with a change in the direction of cultivation, the tree crowns should not be flattened. The trees to be removed must be cut more forcefully on all sides, that the solid trees can grow. After removing half of the trees in a 6X4 m planted orchard, we get the width between the rows 8 m and distances in rows 6 m.