This form consists of a conductor and regularly spaced horizontal arms. There are 4-5 arms, and the distances between them are from 30 do 50 cm. Shoulder length is from 1,5 do 2,0 m. The formed trees are cut only by the short shoot method. Palmettes require supports in the form of posts and horizontal wires stretched over them (Lynx.). 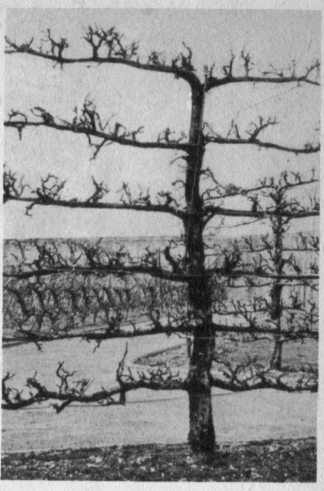 When forming horizontal-arm palmettes, leave them on a one-year-old oculant 2 shoots near the lowest stretched wire and conductor, which we shorten at the height of the second wire (Lynx.).

Lynx. Cutting and bending shoots in the first year of forming a horizontal palmette.

All other shoots should be cut smooth. Bend the remaining shoots horizontally and tie them to the wire. After trimming the conductor, shoots will grow on it, the first of which forms the vertical axis of the tree, and the two side ones another pair of arms. For the guide to grow exactly vertically, attach a stick between the wires and attach the growing shoot to it (Lynx.).

Lynx. A method of tying up the summer increment to force it to grow vertically.

The shoots intended for the second pair of arms should be bent to the level in July at the latest and tied to the wire (Lynx.).

Lynx. Bending the shoots in July to form a second pair of boughs.

Axial shoots extending the first pair of arms must also be bent and tied. For the first time in June, pinch all remaining shoots for 3-5 leaves and again in July for secondary growths for 2-3 leaves.

In the spring of the second year, the conductor needs to be trimmed at the next third wire. If any long shoots were not pinched in summer, they should be trimmed over 3-5 eyelet. We finish the spring shaping work by improving the bonds of these shoots, which were bent last year (Lynx.).

Lynx. Cutting and bending shoots in the second year of horizontal palmette formation.

In the summer we try to bring out a third pair of horizontal shoots and a guide. All unnecessary shoots should be removed in the same way as last year.

In third, in the fourth and fifth year at the most, we form the next arms, finishing molding at a height of approx 2 m. After extending the last pair of arms, remove the conductor.

Formed trees are best cut in the summer in late July and early August. At this time, we shorten all the long shoots growing from the shoots to 2-3 leaves. After cutting, only the shoots remain on the limbs. The summer cut can be supplemented with a spring cut. In spring, these shoots need to be shortened to 2-3 eyes, which were omitted during the summer cutting. If there is a need to shorten excessively overgrown fruit-bearing branches, we also do it in spring.