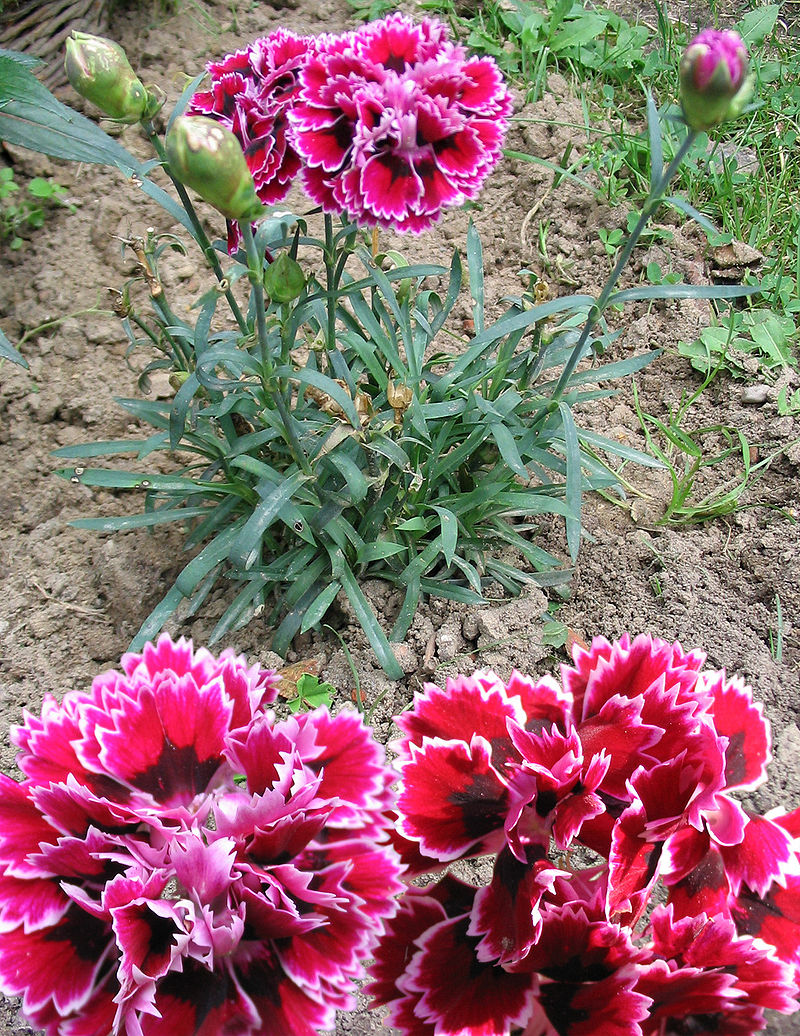 Carnation (Dianthus Caryophyllus) it occurs in many species, both perennial, and annual. Of the latter, the most recommendable, as well as especially liked, there is a large-flowered carnation of the Szabo breed (Chabaud). These cloves grow to a height 50 cm, the stems are angular, erected, branched, narrow leaves along the entire length, lancetowate, covered with gray, wax coating. The flowers are large, full, mounted singly or several times on long shoots, strongly fragrant. The edges of the petals are serrated, cylindrical cup, greenish.

Clove seeds are sown in boxes or for a warm inspection in February or March. Seed the seedlings for a semi-warm inspection, and after the last spring frosts, plant them into the ground at a distance of 25X30 cm – on the previously prepared bed. These cloves begin to bloom after 6 months after sowing – So, sown in February, they begin to bloom in July and continue to bloom until late autumn.

During growth, cloves require proper care, which consists in systematic watering – rather rarer but more abundant, airing during cultivation in frames and weeding. Cloves also require fertile soil, deeply tilled and sunny position. To get nice, large flowers, on long and straight stems, we also need to perform a few cultivation treatments. The first is to stake individual plants or stretch a net over the bed. This is due to the properties of cloves, which branch and branch. Staking consists of tying individual shoots of a plant to pegs. Better results are obtained when the mesh is stretched between the plants 20 cm above the ground. We can make this mesh ourselves from wire and string (along the field – wire, across – twine). Cloves grown in this way will have stems erect and directed upwards. The second care step is shelling flower buds. The cloves at the tops of the shoots develop several flower buds. If we leave all the buds on the shoot, will bloom in turn, but with smaller flowers and often with a broken calyx. Because, for a nice ground carnation, we should leave only one on each shoot, the most strongly developed flower bud, and remove the rest at the earliest possible stage of development. The easiest way to do this is with your fingernail. The following varieties are on sale: Aurora – salmon pink, Etincelant -shining scarlet red, Jeanne Dionis – White, France – pale pink. La Perle – Sure, pink rose, Legion dhonneur – brick red, Marie Chabaud – yellow, Queen Ros alive – pale pink.