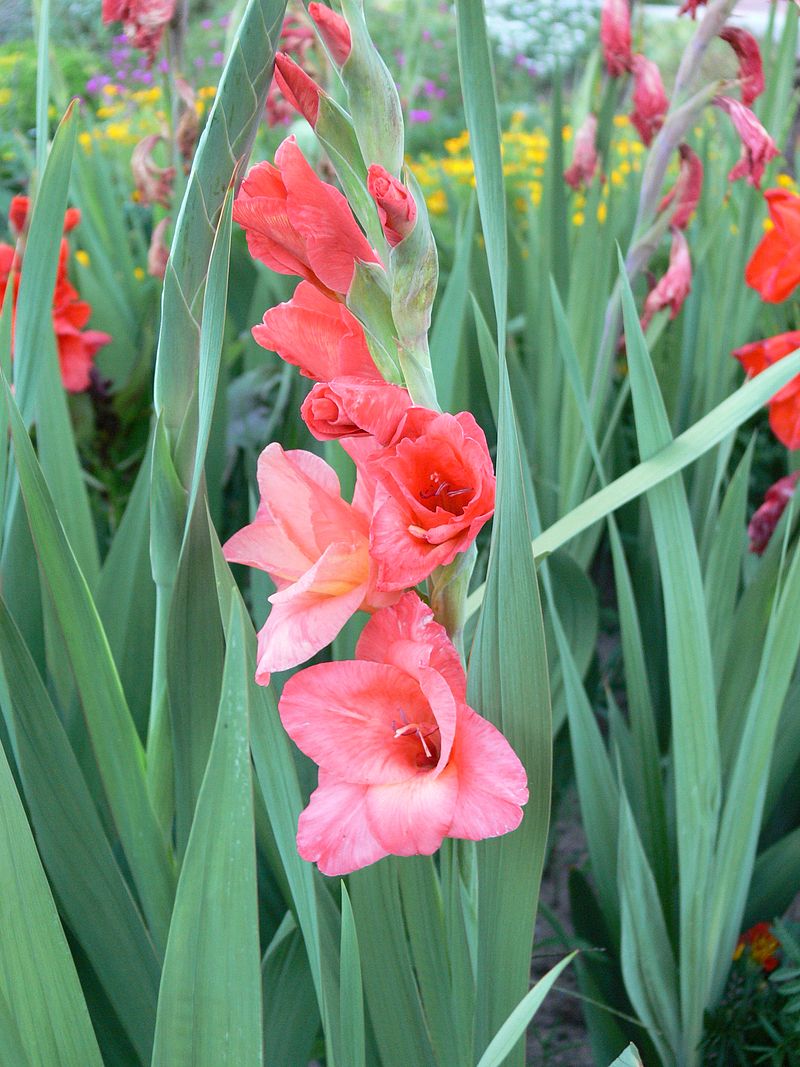 Garden gladiolus (Gladiolus hybridus) is a plant of height 50-150 cm, mainly grown as a cut flower. It consists of an underground part, permanent (tubers), which should be stored in a room with a temperature of + 5 ° C, single stem, stiff, at the base thickened, lanceolate leaves. A flattened spike of flower usually grows between the leaves. The flowers are shaped like bent goblets, diameter up to 20 cm, unilaterally located on the top part of the stem. The flowering time is closely related to the time of planting – from July to September. The colors of the flowers are varied - from white, through pink, red to dark lilac, sometimes mottled and spotted.

The gladiolus reproduces from a tuber, which is played annually, thickened part of the shoot, in which the plant accumulates nutrients. Under our conditions, the tuber cannot winter in the ground and must be dug up after the end of vegetation. At the end of the growing season, the tubers acquire a shape characteristic for a given variety, size and color. In addition to replacement tubers, nodal tubers are formed, which, after detaching from the mother plant, are planted in March, in increments of every 5 cm, for a cool inspection, where they stay until late autumn. Larger adventitious tubers (at least in diameter 2 cm) they are being blown up permanently, most often on the grasslands, in the second half of April or at the beginning of May, keeping the distance between the rows of approx 25 cm (just like normal tubers). In rows, depending on the size of the tubers, spacing applies – 10-12 cm, in the case of small tubers – 3-4 cm. The planting depth should be approximately three times the height of the tuber (6-15 cm).

Due to the high sensitivity of gladioli to diseases of fungal origin, before planting, tubers should be treated with solutions of fungicides.

Gladioli grow well in fertile soils, carious, light, sufficiently moist, but not freshly fertilized with manure and in a sunny position. When the gladioli are faded, and their leaves will turn yellow (usually in early October) tubers are dug up, pruns the leaves and the remainder of the shoot (5 cm above the tuber). Store the tubers prepared and dried in this way.