Forming and cutting trees in home and allotment gardens.

All these forming and cutting methods can be used in home and allotment gardens, which are recommended in commercial courts. In addition, amateurs may wish to try one of the molding methods described in the previous chapter. Finally, there are forms of artificial crowns, which can only be found in gardens. They are especially popular in England, in France and Italy. Such forms include cords or so-called cordons, formy Y i U, candlesticks, horizontal palmettes and others (Lynx.). 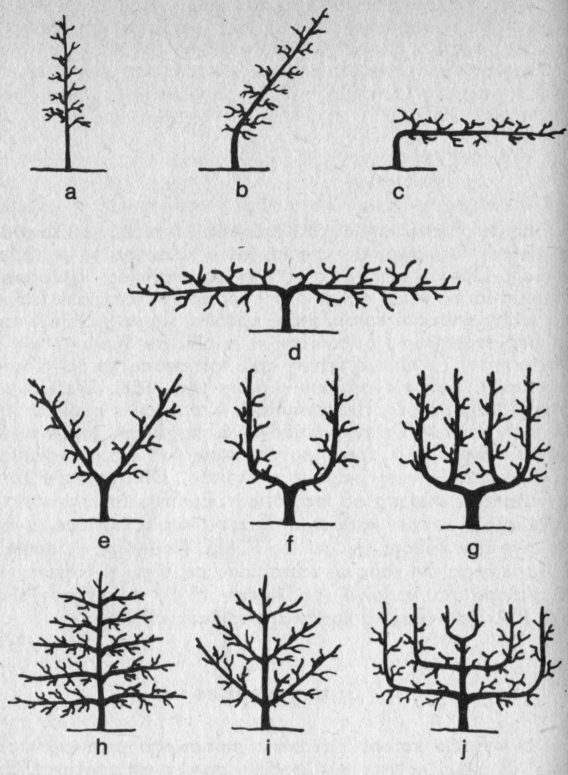 All these forms are carried out at scaffolding made of stakes and wires stretched over them. Single trees can also be fastened on a lattice made of wooden slats, or on the wall by attaching horizontal wires to it. The formed crowns are only cut into short shoots. Artificial forms should only be given to dwarf trees. Vigorously growing trees, and even half-dwarfs are not suitable for this purpose. Dwarf pears grafted on a quince are the best solution in an artificial form. Then the apple trees were grafted on a dwarf rootstock M 9, stunted inserts B 9, P 2, P 22 and on a dwarf rootstock M 26.

Candlesticks are a variation of double cord or palmette, where the arms were first carried horizontally and returned to the vertical position. Such a shape is obtained by proper bending of the shoots. The principles of forming and cutting candlesticks are the same as for the formation of a horizontal palmette.