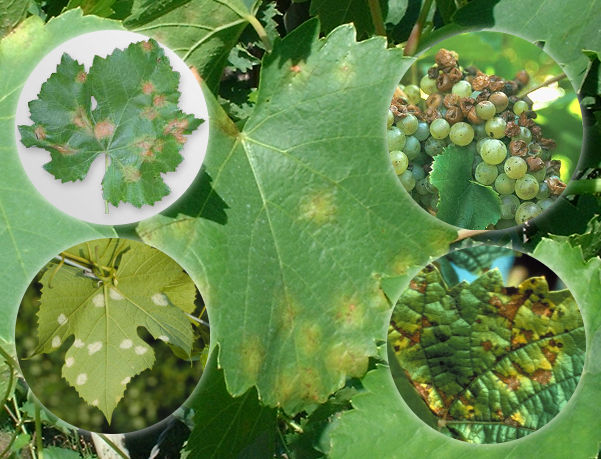 Diseases and pests of grapevines.

A dangerous disease of grapevines is downy mildew of grapevines, which occurs especially strongly in wet years. Leaves attacked by this fungus turn yellow and brown, and a white bloom forms on their underside. Infested berries rot and shrink. The fight against this disease consists in spraying the bushes three times: the first time before the formation of inflorescences, second – before flowering, and the next – when the fruit is the size of a pea. Copper is used 50 – 0,25%, Cynkotoxu (0,3%) or Dithane M-45 -0,2%.

Powdery mildew is less common in Poland than pseudo-mildew. It has the form of white, flour bloom, composed of the mycelium of the fungus Unicinula necator and its conidial spores. Pale green spots appear on affected leaves, which turn brown after some time. The dying leaves twist in a characteristic way. Usually, disease-controlled flowers do not bear fruit, but they fall, and diseased berries become deformed and burst. We fight powdery mildew, using spraying with sulfur preparations. We start before flowering and at intervals 11 12-spray the day ones 2-, 3-fold. In addition, infected leaves should be cut and burned, shoots and fruits.

In the event of a mite – grapevine harlots, which feeds in the leaves, causing growths, the plants are sprayed with Anthio during the development of buds – 0,1%.