In fruit shrub plantations, pruning must be made annually in the spring or after the fruit harvest. After harvesting, always cut raspberries to remove the dying shoots of the previous year, make shoots young, this year's could develop freely.

Black and red currants are cut in our country in the spring, but it is even better to cut them after the August harvest. Strong spring pruning and summer shoot pinching are used for grapevine cultivation.

Two-year or one-year-old, properly grown shrubs with a few shoots are planted in a permanent place a little deeper than previously grown in the nursery. After planting, the shoots should be trimmed above the third or fourth eyelet from the ground (Lynx.).

Lynx. Planted black currants are cut to a few meshes above the ground.

The trimmed bushes create several new growths in the first year, which should not be shortened. In the next two years, new shoots are added, and all of them remain as long as they grow vertically or diagonally. Some of the weaker shoots lie on the ground and these need to be removed (Lynx).

Lynx. Cutting currants in the second year of growth is to remove the shoots that litter the ground.

After the currants enter the fruiting period, it is necessary to screen the bushes. Every year we cut out at the base of the bush after 3-5 the oldest twigs, leaving the same number of young annuals (Lynx.).

Fig. Cutting the fruiting blackcurrant bush is to remove every year from 3 do 5 the oldest twigs.

The fruiting black currant bush should consist of 8-10 main shoots, the oldest of which should not be more than 3 patch. Many branches that can be cut are recognized by the color of the bark and their location. Young shoots are olive green and set vertically or slightly tilted. Old shoots hang down in an arched shape or lie on the ground and are dark gray in color. the intensity of the pruning depends on the variety and the conditions in which the currants are grown. Some varieties like Black Smith, Brodtorp and others produce a lot of growths and these need to be intensively x-rayed, because the bushes thicken quickly. Also, in fertile and moist soil, bushes need to be cut harder, because it grows more shoots than in poor soil. Neglected bushes require very intensive pruning (Lynx.). 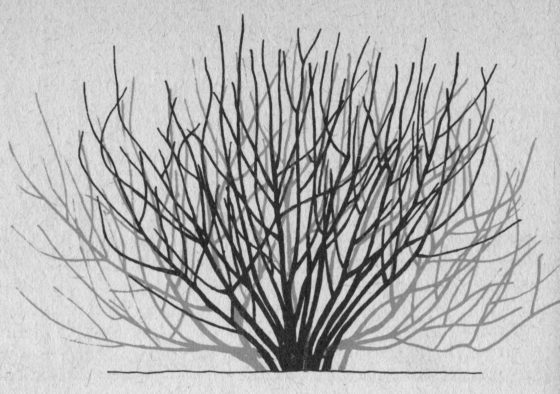 Cutting blackcurrant in plantations intended for mechanical harvesting of fruit.

In large plantations intended for mechanical harvesting of fruit, currants are planted very densely in rows, usually in co 40 cm, while keeping 3,5 m of the distance between the rows. Dense planting of bushes is to encourage them to produce shoots growing towards the inter-row, which can then be easily picked up by the pick-ups and caught by the fruit shaker (Lynx.). 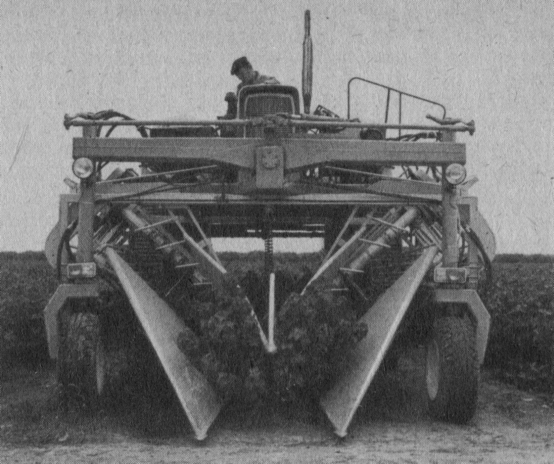 Lynx. Currants intended for mechanical harvesting must have shoots growing in the direction of the inter-row.

Despite the dense planting, some of the young shoots inside the bush are directed towards the lines of the row. Such shoots need to be cut at the base. The oldest shoots lying on the ground also need to be cut.