The arched form belongs to the lanes formed of skeletal shoots bent in the form of an arc. The first tier of arches is created by bending one-year-old maiden. The next floors are formed by the bending of the strongest shoots breaking out of the stiff part of the arches below. The most famous arch crown is Lepage's crown developed in France.

Picture. A sash is made of arched crowns

This form can be given to dwarf and semi-dwarf apple and pear trees. Arch crowns require scaffolding in the form of posts and wires stretched over them. Orchards formed in this way can be found in France and Italy.

In order to obtain arched crowns, annual maiden trees are planted in the orchard at a distance of 2-3 m in a row from the row and 1 - 2 m in a row. After planting, the tree is shortened in height 150 cm from the ground, and side shoots above 2-3 eyelets. In mid-summer, the buds are bent like this, that each of them forms an arc at a level of approx 0,5 m from the ground. All trees bend in the same direction, in a row line. The bent tree tops are attached with a string to the wire (Lynx.). 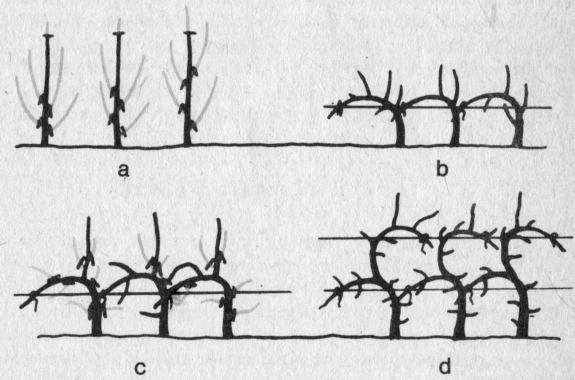 Lynx. The next stages of forming arch crowns: a - annual buds trimmed after planting; b - specimens bent in the form of an arc, in mid summer; c - spring cutting in the second year; d - two floors of arches formed.

At spring, in the second year after planting trees, it is left on each arch, in its top part, one shoot at a time. The remaining shoots are shortened over 2-3 eyes or cut smoothly if they are strong. In the middle of summer or in the spring of the following year, when the shoots left on the arches reach 150 cm in length, they are bent in a similar way to the first year maidens, only in the opposite direction.

In third, in the fourth or possibly in the fifth year, successive levels of arched branches are formed and attached to wires. Molding is complete, when you get 3-4 arches floors. The formed trees are cut into short shoots.